Q: Who’s all out of bubblegum? What’s the only thing he wants to do besides chew? read to the end to find the answer!

There's a scene in Barry Levinson’s period bromance Diner where sports-mad Eddie (Steve Guttenberg) sets his fiancée (Sharon Ziman) a football quiz. The stakes? Either she proves she knows enough about the things he loves, or the wedding’s off. Though that’s obviously wildly eccentric behaviour, there was something about that scene that triggered the crazy in fifteen-year-old me. Within days, I’d devised a quiz of my own, and soon after, forced the few friends I had to take it.

It wasn’t about sports, of course, because, well, I had no interest in that sort of stuff, and still don’t. Instead, it covered the things all right-minded people treasure: Star Wars, Star Trek and Superman, Bond and Battlestar Galactica, Flash Gordon, Logan’s Run and, well, there was a question in there about Manimal too.

The DNA of that original quiz runs strong in the book you now hold in your hands. To paraphrase Jurassic Park, questions found a way.

I’ve always felt that to completely grow up, to turn your back on the things that once meant the most to you, would be the most terrible betrayal of the child you once were. Almost like murdering your juvenile self. To that end, I still love all the same things that I did as a kid, only ever adding to my interests – never subtracting.

As a collector, film critic and, for want of a better title, a professional appreciator, my mission in life is to both celebrate, and maintain, the memory of everything I can’t think about without getting a lump in my throat. Which is a lot. My nostalgia knows no bounds and my enthusiasm has no brakes.

This calling of mine hardly materialised from thin air. 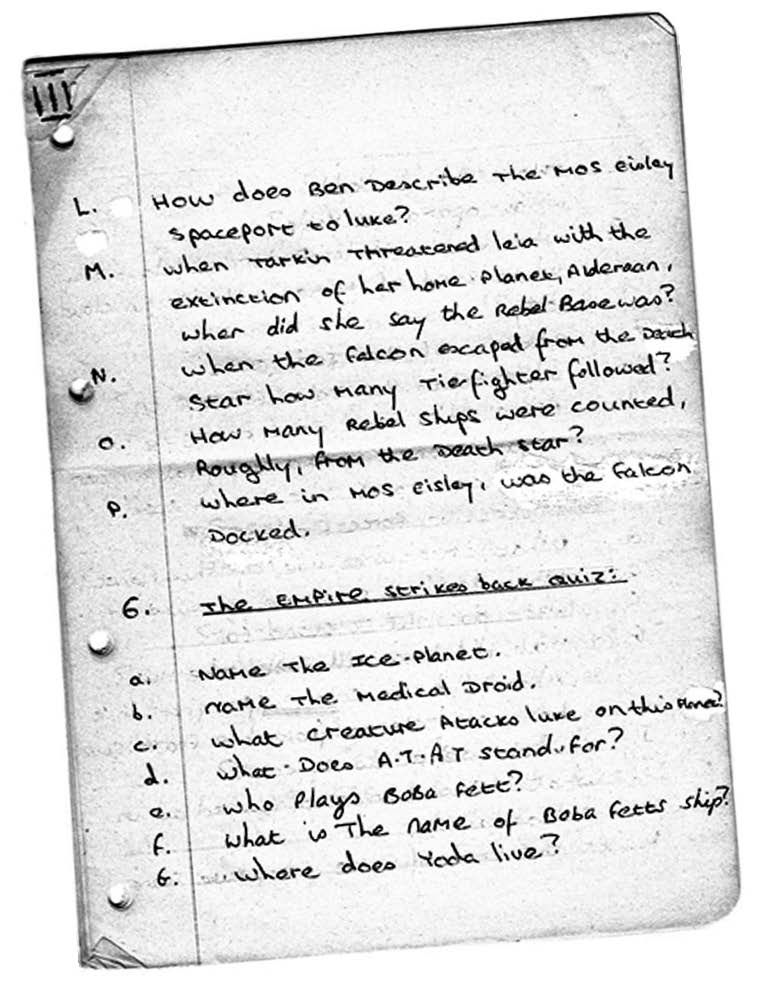 It begins! Pages from the quiz that started it all. The great-granddaddy of the book you now hold in your hands.

My mother was a nerd before the term existed. When I was small, every Saturday afternoon, we’d pull the sofa close to the TV and sit, cuddled up, eating snacks and watching old movies. It was my favourite time of the week. My mum loved musicals, comedies, thrillers…Really anything good. She introduced me to Humphrey Bogart, Cary Grant and Bette Davis, to Katharine Hepburn, Bob Hope and Gene Kelly. Also directors – unveiling the worlds of Alfred Hitchcock, Billy Wilder, Michael Curtiz and the like.

And while we watched those fine old films, long before the invention of commentary tracks, she’d tell me about the casts – from the stars to the supporting players – sharing stories from their lives and the making of their movies. She brought cinema from the age of serials and newsreels to life, and honestly, it intoxicated me. I hung on her every word and though at school lessons rarely sank in, at home, with my mum, I retained every word. I was eight-and-a-half when Star Wars came along, and having been primed for geekery by my mother, and further encouraged to embrace the dorky arts by my collector cousin Ronald, I fully embraced my destiny: by nature and nurture a nerd, and proud of it.

I’ve never really liked the word trivia. It’s so judgemental. The facts and information I’ve so eagerly absorbed over the years are of value to me, and important to me, and I know I’m not alone in this. So a noun defining such choice nuggets as fun, yes, and interesting, certainly, but also largely worthless and inconsequential, has no place in a quiz book of mine. Take them separately and, I’ll concede, they might not seem like anything more than amusing fripperies, but stack a whole bunch on top of one another and you begin to build a picture of how the things we love came to be. And that’s not trivial. 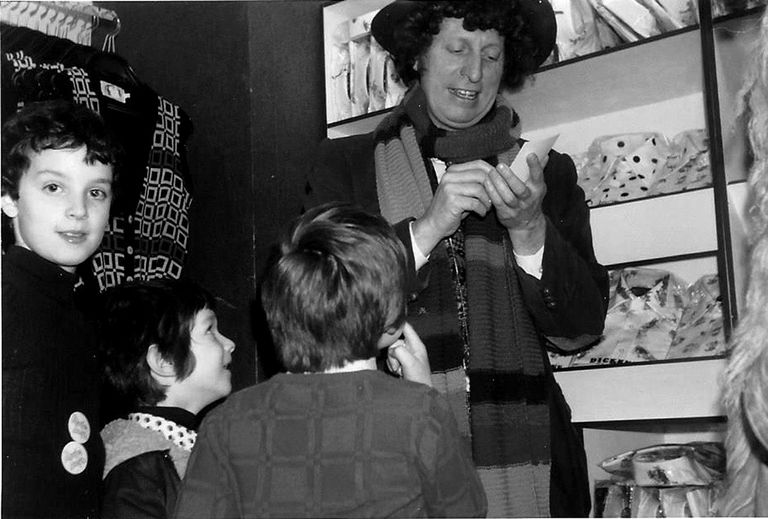 A glorious shot from 1975 of me, age six, gazing with love and awe at the Doctor.

So these facts, then, were first of use to me, and my friends, in those long-distant days of pre-Internet yore. Invariably I’d get a call from a mate who, for the life of him, couldn’t remember the name of something, or who made such-and-such, or what happened at the end of that thing. And I’d know, and they’d be grateful, I’d feel good about myself, and all would be right with the world. Pub quizzes, too, were my thing. Just don’t ask me sports questions. Or pop questions. Or geography questions. Or really anything about the real world. But if the questions concern comic-books, films, TV shows, videogames or any other fun, cool stuff like that…I’m in like Flynn.

When, however, the Internet made the sum of all human knowledge available to everyone, around the clock and around the globe, my capacity for fascinating facts lost some of its cachet. Still, you can’t trust everything you read online: I’ve lost count of how many times, while interviewing an actor or filmmaker, that I’ve referred to something I read about them online and they’ve flatly refuted it.

There’s also value in actually knowing things. You could, for example, write a quiz book. Or better still, buy a quiz book, to test yourself, your friends and your loved ones, finally determining who among you rules your particular nerd roost.

I’m not saying I wrote this book off the top of my head. The web was certainly useful. Back when I wrote a book about action movies in the mid-Nineties, I spent days at the British Film Institute’s reference library, using an old microfilm reader to trawl through even older magazine cuttings. Honestly, I much prefer the IMDb! I’ve also collected a dizzying number of reference books over the years, lots of making-ofs and episode guides I was able to press into service for the first time in forever.

To write Vintage Geek’s 1,000 questions and answers, I spent six months disappearing down the nerdiest and most labyrinthine rabbit holes I could unearth, barely coming up for air as one fact led to another, then to another until – Holy Cow! I didn’t know that! Many wild things were discovered, and corralled into the pages ahead.

It’s been a significant voyage of discovery for me, and I’ve loved the process, although walking around with a head swirling with facts and figures makes it pretty much impossible to focus on anything in the real world. Now the book’s finished – this introduction was the last thing I wrote for it – a period of real-life readjustment is certainly in order as I reacquaint myself with my family, my friends, and the outside world. 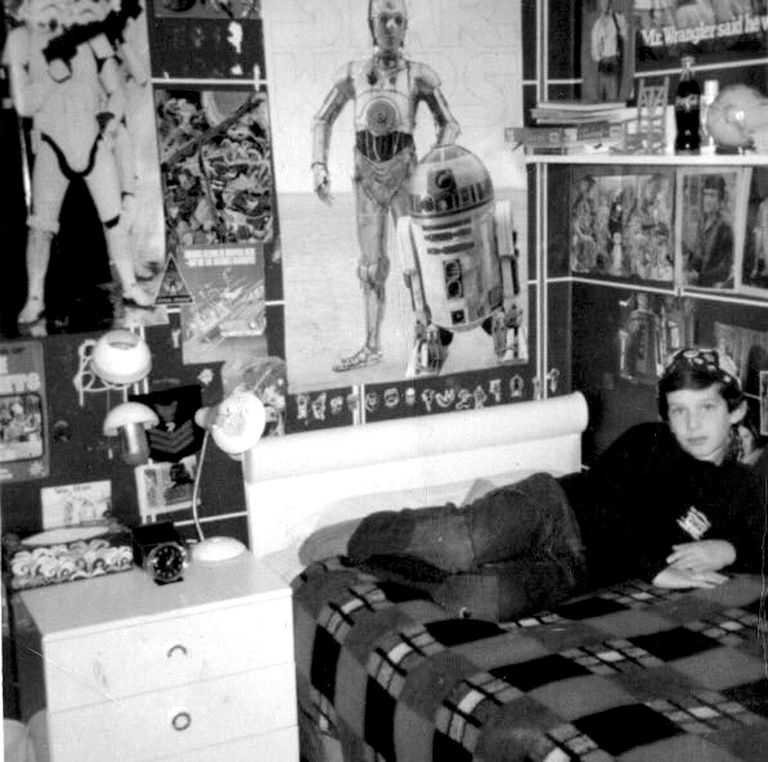 It’s been more than forty years since this pic was taken and I still love all the same things.

My hope for this book is that while, yes, I expect you’ll be able to answer many of the questions, several, I think, will take you by surprise. You will, fingers crossed, learn several amazing new things, about several amazing old things, as we trawl through such beloved 20th-century fandoms as Fifties’ Sci-Fi Cinema, Sixties’ Star Trek, Seventies’ Stephen King, Eighties’ Actioners, Nineties’ Simpsons and a whole lot of other goodness besides.

To cram, then, or not to cram? Well, Vintage Geek is meant to be fun, so the last thing I’d want you to do is treat each quiz like an exam. That said, it would surely be no hardship to spend a day watching, say, George Romero’s first three Dead flicks or John Carpenter’s Apocalypse Trilogy, and certainly, you’ll get more of the answers right if the films are fresh in your mind. Make a day of it, I say! 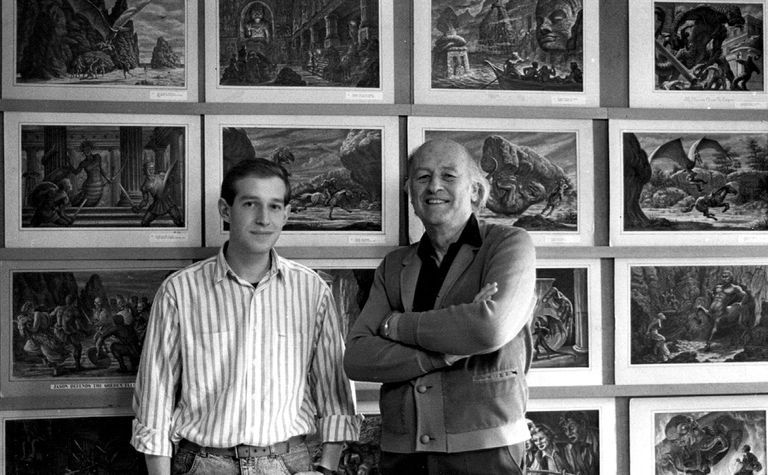 Hangin’ with Harryhausen in 1988. I was 19 and had hair that I didn’t appreciate. What I did appreciate was being in the presence of my hero.

Along the way, you’ll encounter fifty fantastic guest stars: writers, artists, musicians, actors, filmmakers… All now quizzers, too, and absolute legends. I’m privileged to have befriended many of them on Twitter, my natural online habitat. If you’ve not yet joined my great, geeky community, come say hello – I’m not hard to find and I don’t bite.

Good luck then, my friends, my Vintage Geeks!  May the Answers be with you all. 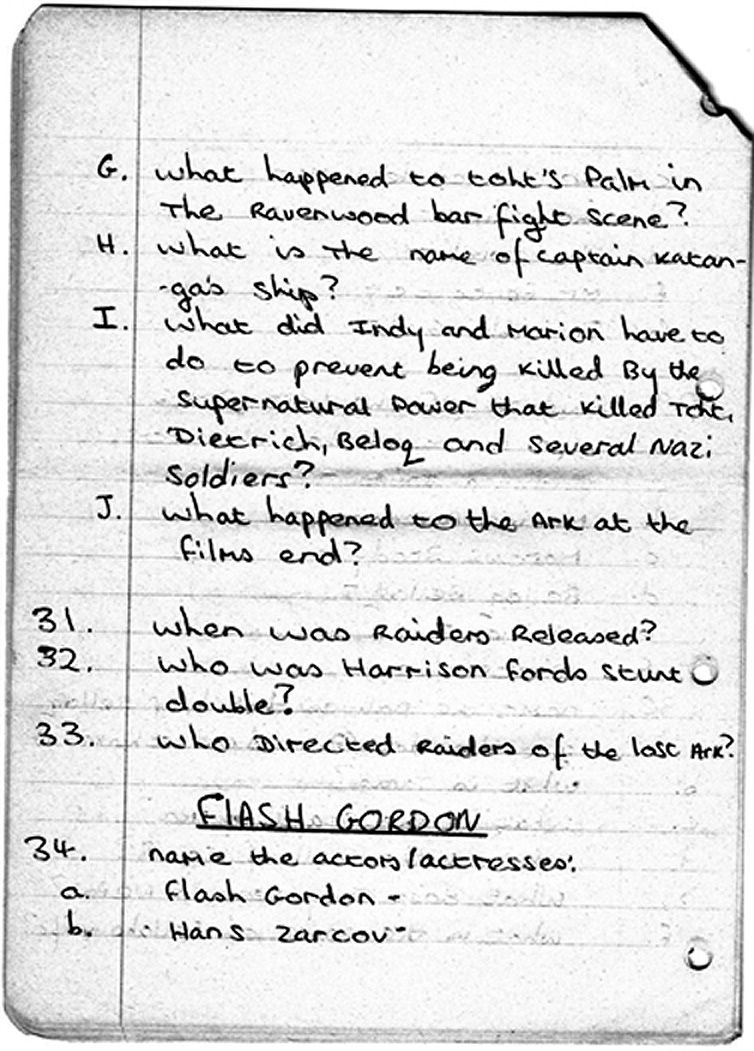 From the chapter ‘If it Bleeds, We Can Kill It: Eighties’ Action Classics’, the answer is...

Marshall Julius is author of Vintage Geek: The Quiz Book - details below!