Convicted of a crime he didn’t commit, Cade is facing a year in reform school when he finds himself suddenly transported to another realm - but this new world is no escape.

Populated by bloodthirsty prehistoric creatures and fierce warriors, Cade's surroundings are full of danger. Along with his fellow students, Cade is forced to become a contender in a deadly game of the highest stakes, controlled by invisible overlords. Who are these brutal rulers, and why did they choose Cade? Before he can find answers, Cade must get ready to fight ...

BECAUSE IN THIS GAME, FAILURE IS NOT AN OPTION

Though none of the below artwork features in the novel, Taran worked closely with some of the world’s best paleo-artists and digital painters to help visualise the world as he wrote it. What follows is just a small selection of The Chosen’s concept art — we hope it inspires you to dive into the book!

Richard the Lionheart’s lost crusader ships sail towards sauropods on a beach, with ichthyosaurs following in their wake. A kronosaurus jumps for a passing pterosaur in the foreground. Painting by Lukas Banas. Cade fights a pack of deinonychus raptors atop a Mayan pyramid in the forgotten city of Hueitapalan, wielding the long-lost Honjo Masamune sword. Concept sketch by Rodrigo Vega. Painting by Raph Lomotan. 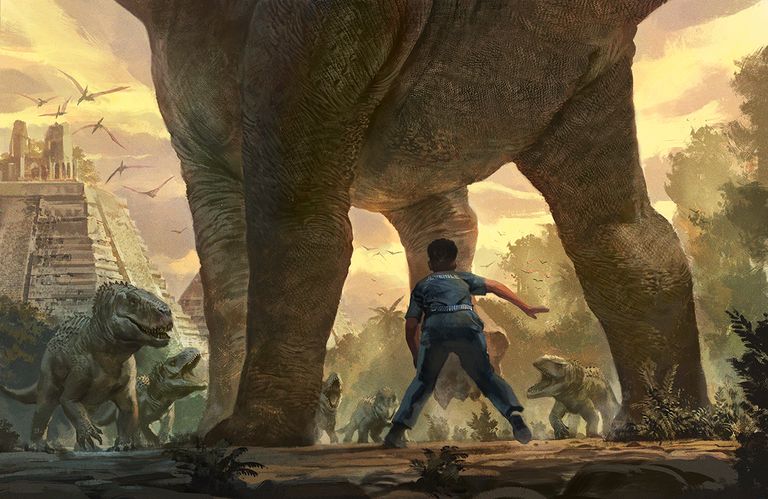 Cade is trapped beneath a sauropod in the forgotten city of Hueitapalan. A pack of postuchuses approach. Concept sketch by Rodrigo Vega. Painting by Raph Lomotan. 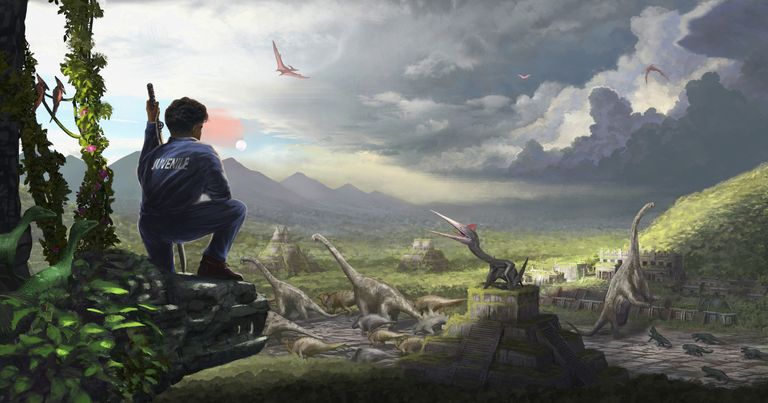 Cade looks over the forgotten city of Hueitapalan. A Quetzalcoatlus perches upon a pyramid, while a super-herd of herbivorous dinosaurs migrate through the central plaza. Painting by Matthew Sellers. Amber, an 80’s era schoolgirl stands upon a wall, preparing to stave off oncoming creatures with a battle-axe. Painting by Raph Lomotan

The disappeared cruiser, the Witchcraft, sails down a river, passing by a pair of stegosauruses and a diplocaulus. A giant Olmec head rests in the background, with a Meteor jet fighter that once belonged to David Atcherley lies crashed nearby. Painting by Lukas Banas. 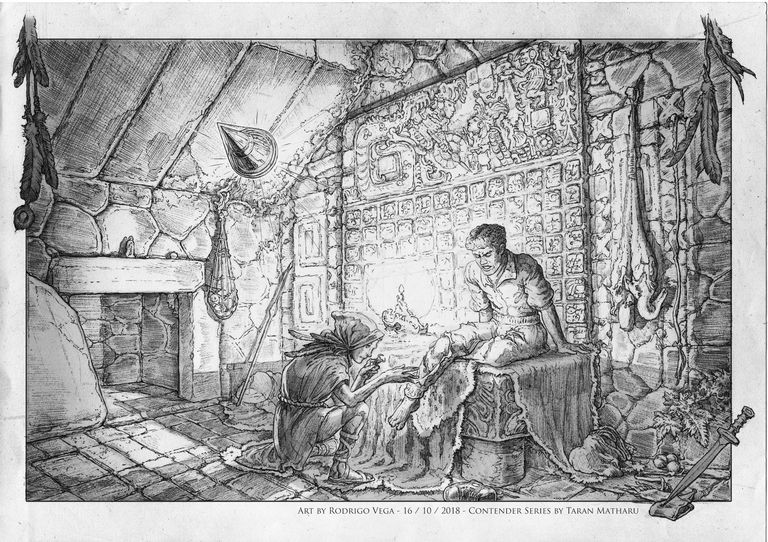 Cade has his wounds tended by a roman legionary inside a Mayan temple. Hunted compsognathuses hang from the wall. Sketch by Rodrigo Vega. 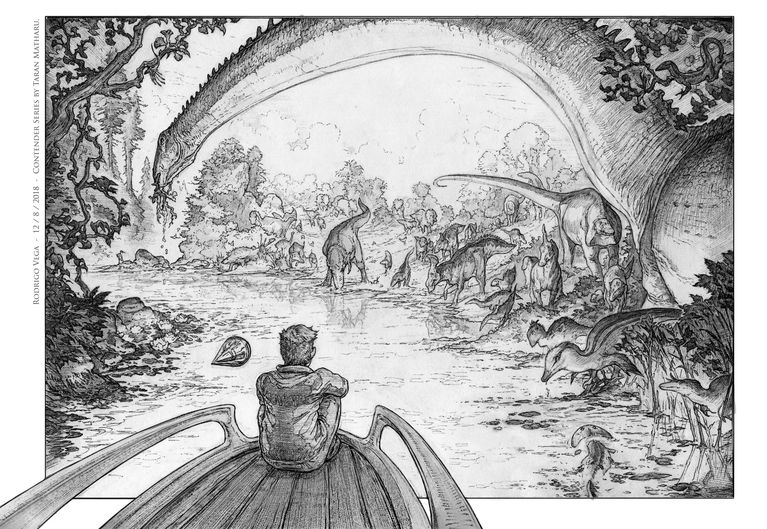 Cade sits at the front of a long-lost cruiser, the Witchcraft, observing prehistoric fauna at a watering hole. Sketch by Rodrigo Vega. 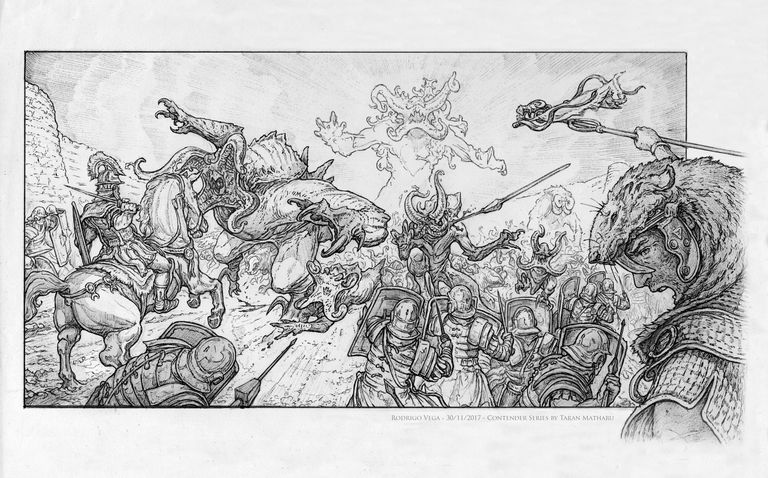 A lost roman legion battles a horde of creatures. Sketch by Rodrigo Vega 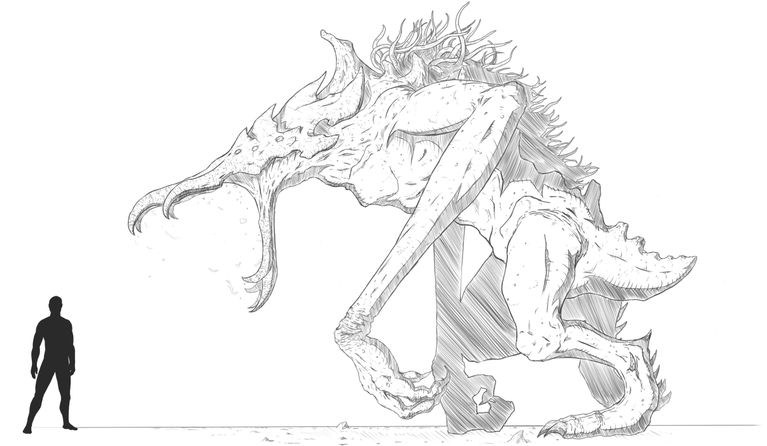 The world of Contender: The Chosen is rich with history, and is grounded in over five years of researching missing persons, lost artefacts and humanity’s forgotten past.

Whether entire armies that marched to unknown fates, ancient cities once discovered and since lost to the mists of time, or treasure-laden ships that vanished without a trace, this realm is strewn with the answers to some of history’s greatest mysteries.

But Earth’s past is more than the sum of human achievement, and primeval creatures roam the jungles — taken from the full spectrum of Earth’s prehistoric beginnings.

Here, dinosaurs are not all made up of a simple layer of green lizard skin over bone, but are unapologetically rendered with all the lumps, bumps, wattles, bristled spines, balloon-like vocal sacks, vivid skin-tones, and plumes of display feathers that today’s scientists know they bore.

AND YOU CAN JOIN TARAN, SIGNING CONTENDER THE CHOSEN, AT OUR LONDON MEGASTORE!