Neal Asher: Where To Start Reading?

We asked Neal Asher to talk newcomers through his huge range of titles. Over to you Neal...

More and more frequently now people ask me, of my books, ‘Where do I start?’ I guess it can be a daunting prospect now I’ve published getting on for thirty of the buggers, but understand why many want to start when they see the enthusiasm of those who have been reading for some time. And it is to those long-time fans I turn to for anecdotal guidance.

But first let me give you some idea of what these books (also novellas and short stories), are all about. Many of the books set in the ‘Polity’. This is a future in which AIs control the ‘Human Polity’ – a vast civilization taking up a large portion of the galaxy. Books about this future form the main body of my work, which consists of series, trilogies and ones that stand alone. I have also written books outside of the Polity set in other futures, but there are not so many of them. These are The Owner Trilogy – a dystopian near future – a one-off time-travel book called Cowl, and a few novellas published before I was taken on by Macmillan. The only books where you will find these futures are mixed together, is in some short story collections.

Start with The Owner trilogy here.

My fans often tell me of which books introduced them to my work. Quite often they will have picked up something in the middle of a series and, enjoying that, moved on to the rest to discover the order of the books. Others, who read my books from the beginning, prefer publication order, but publication order is not series, or the chronological order of this future. For example, publication order of the first books with Macmillan was: Gridlinked (Cormac book 1), The Skinner (Spatterjay book 1), The Line of Polity (Cormac book 2), Cowl (stand-alone time-travel), Brass Man (Cormac book 3) and The Voyage of the Sable Keech (Spatterjay book 2). So you can see they’re a bit all over the place. To add confusion, while these were being published, I also wrote and published two books for Night Shade Books in the US, which were later published in the UK. These were Prador Moon (A Polity prequel) and Shadow of the Scorpion (A Cormac prequel).

Now, putting aside the fact that some prefer The Owner trilogy to the Polity books, or prefer Cowl (available here), I’ll concentrate on the Polity books because with those is where confusion arises:

The consensus of opinion I have gleaned from social media, is that you should start either right at the beginning with Prador Moon and then follow through chronologically, or you should read the first two series I wrote. The latter means: starting from Gridlinked and reading the Cormac series, then starting with The Skinner and reading the Spatterjay series. Actual chronological order I’ll put below.

However (there’s always one of those), in the chronology of the Polity future, the Spatterjay trilogy comes after trilogies I wrote later – Transformation and Rise of the Jain. But some feel it better to read the Spatterjay trilogy (after the Cormac series) before moving onto Transformation and Rise of the Jain because my writing has changed over time and you will have a better grasp of the ones written later by reading those written earlier.

Sorry if that confused you – I’m trying to be as clear as possible.

So here, for your edification, is the order of the books as they lie in chronological order in this Polity future, but not in the order in which I wrote them:

Prador Moon: A war between the Polity and the alien prador is often referred to in the later books. This prequel tells a story about its beginning. It’s a short action read and a good introduction that does not have the complications of the later books. Available here. 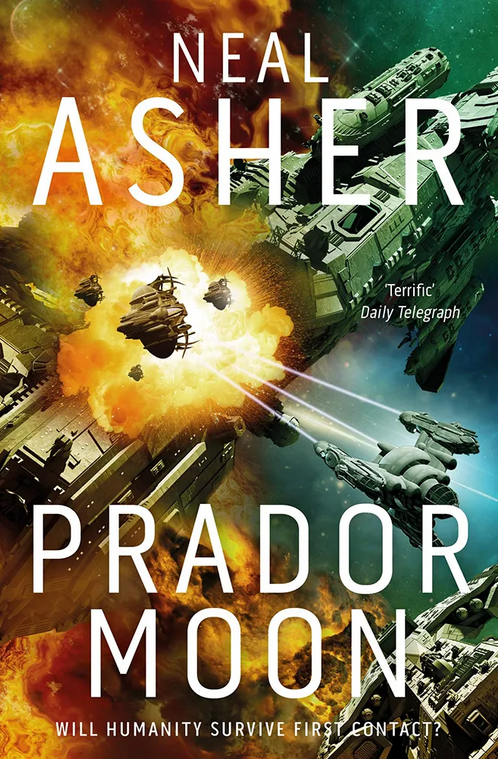 The Shadow Of The Scorpion: This prequel tells the story of Ian Cormac growing into adulthood. He goes from childhood to military service in the ruination left by the prador-human war, is haunted by memories of his missing father and by the mysterious intermittent presence of a scorpion war drone. Available here.

Agent Cormac is now an agent of Earth Central Security. He starts being gridlinked i.e. had computer hardware in his skull linking him to the AI net, but is taken offline to recover his humanity as he investigates threats to humanity: separatists terrorists, a giant alien probe called Dragon, and ancient lethal alien Jain technology. The books are: Gridlinked, The Line of Polity, Brass Man, Polity Agent and Line War. 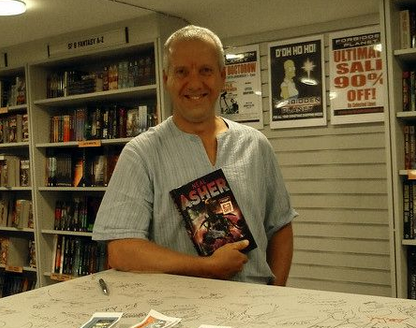 Neal Asher launching 'The Gabble' at our London Megastore - November 2008

The Technician: This stand-alone Polity book tells the story set on the planet Masada, which appeared in The Line of Polity. It concerns the Atheter race who committed a form of racial suicide by sacrificing their intelligence two million years ago, a biomech war machine they left behind and an even more dangerous mechanism left to ensure their choice. Available here.

Transformation: A character in The Technician is the black AI called Penny Royal. This trilogy concerns a resurrected soldier from the war seeking to avenge an atrocity committed by Penny Royal during that conflict, restitution and absolution, and apotheosis.

The Rise Of The Jain: At the end of the Cormac series the haiman (a combination of AI and human) Orlandine is woken up by Dragon after two hundred years frozen. They have a job to do, which is to guard the Polity against an infestation of Jain technology in an accretion disk. Together they create a defence of thousands of giant weapons platforms, but Orlandine’s idea to hoover up the Jain tech using a black hole might not be the best one she had. . .

Buy The Rise Of The Jain trilogy here. 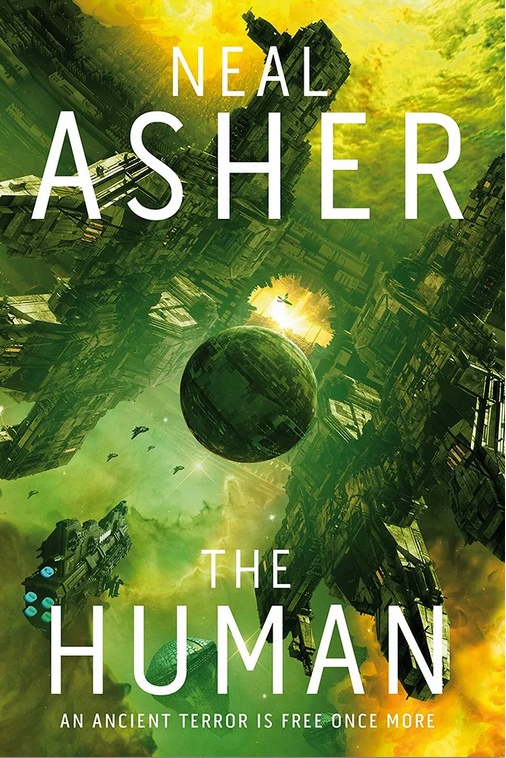 Spatterjay: Three travellers arrive on the oceanic planet Spatterjay, where humans are immortal and very tough by dint of a virus imparted by the leeches of that world, where living sails make contracts with the Old Captains on the ships and an ancient war drone called Sniper is growing bored. They are Janer, who carries the eyes of a hornet hive mind, Erlin who wants to find an Old Captain to teach her how to live, and Sable Keech a policeman who hasn’t allowed being dead for seven hundred years get in the way of hunting down villains. Things are about to turn nasty, what with the old enemy the prador and evil the Skinner arising.

Hilldiggers: A Polity ambassador arrives in a system where a terrible war once raged between the two rival planets where the human inhabitants have ‘adapted’ to their worlds. He knows that during their war, one side captured a bizarre object suspected of being a cosmic superstring and is investigating. It is stored in the four Ozark cylinders of a massively secure space station in orbit. A woman fell pregnant while conducting research on this alien entity they now call ‘the Worm’, and gave birth to quads. Grown up now, one of this exceptional breed seems determined to gain total control of the deadly hilldiggers – giant dreadnoughts used to end that war. Available here.

The Gabble: Finally here's a collection of short stories mostly set in the Polity and often related to the events above. It can fill in some nerdish detail but it can also be a starting point if short stories are your thing. Available here.

So there you have it. You can follow through chronologically or you can sort of go by publication order. I leave it up to you. I will add, that from a recent discussion on all this, that for many readers it did not matter where they started. I've seen those that started from the end of the Cormac series with Line War, others who started with Dark Intelligence. In general, if you enjoy my writing, it doesn't matter too much. You will find your way.