R.A. Salvatore on creating Glacier's Edge and The Dao of Drizzt 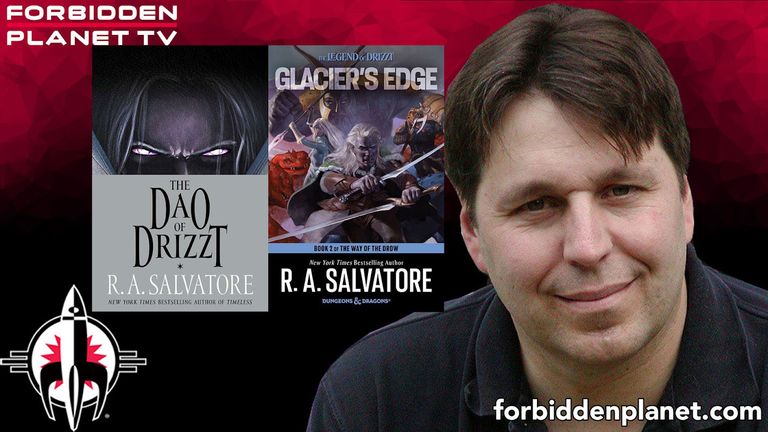 R.A. Salvatore, the wildly-successful creator of the Forgotten Realms series and FP's  favourite drow adventurer Drizzt Do'Urden, joins us at Forbidden Planet TV to talk about his long career and celebrate the release of his TWO latest books: Way of the Drow Book 2 - Glacier's Edge and the long-awaited Dao of Drizzt.

Both are available in beautiful signed bookplate editions from Forbidden Planet!

From New York Times bestselling author R. A. Salvatore comes the follow-up to Starlight Enclave and thrilling second novel in his newest trilogy, The Way of the Drow, expanding the Forgotten Realms through the adventures of Drizzt, Catti-brie, Jarlaxle, Artemis Entreri, and Zaknefein… and a society of drow unlike one any elf from Menzoberranzan could possibly imagine.

There’s a lot that Jarlaxle doesn’t know: is he the lone survivor of the raid on the slaad fortress, can he even find a way to get out, and beyond his immediate predicament, could he possibly escape the ice caverns and get help for his friends?

However, what Jarlaxle does know is that if he plans to come back—if Catti-brie, Entreri, and Zaknafein are to have any hope of surviving—he’s going to have to bring back far more firepower.

An army of aevendrow seems unlikely, so he must go home and pull together a team with great skill and unimaginable power.

But how will he get home? Will such a collection of warriors and mages come to his aid? And even if he manages all that, will it be enough? For Jarlaxle has seen the slaadi’s power and their god in a most personal and terrifying way.

Trapped in the ice while the world is on fire, Jarlaxle is in a race against time—and burdened with a magical secret—to save a peaceful city and his companions.

THE DAO OF DRIZZT

For over thirty years, Drizzt Do’Urden has been one of the most important characters in fantasy literature.

Throughout his novels, Drizzt has written down his thoughts about life and love, the nature of good and evil, the joys (and frustrations) of family, and so much more.

Bound together for the first time, the collected wisdom and philosophy of Drizzt will be a beautifully-packaged gift book—complete with an introduction by bestselling fantasy author Evan Winter—for his biggest fans and readers wanting to learn about this iconic figure.

Growing up in the chaos of Menzoberranzan, one young drow elf tries to make sense of the conflict between the traditions he must serve and the protestations of his own conscience.

To lay bare the injustices he sees and to strengthen his own resolve to follow the ethical call of his heart, Drizzt Do’Urden is both an agent of action and self-reflection.

These, his writings, become critical to his salvation, the way in which he makes sense of a world that to him makes little sense at all.

The impact of his words, of his meditation, of his inward determination will carry him forward, forcing upon him decisions that others would consider noble, perhaps, but surely foolhardy… impossible even.

But to Drizzt, the only choice is to do what is true and right.

These journal entries, then, show the struggle between what has always been and what should be, where the courage to transcend the many obstacles of societal expectations and entrenched power—if nowhere else, then in the soul of an idealist.

They were written to help Drizzt understand himself. But the universal truths will resonate with readers throughout the Realms.

You can order signed bookplate editions of both Glacier's Edge and The Dao of Drizzt below.