Michael Moorcock returns to Elric with the long-awaited Citadel of Forgotten Myths! 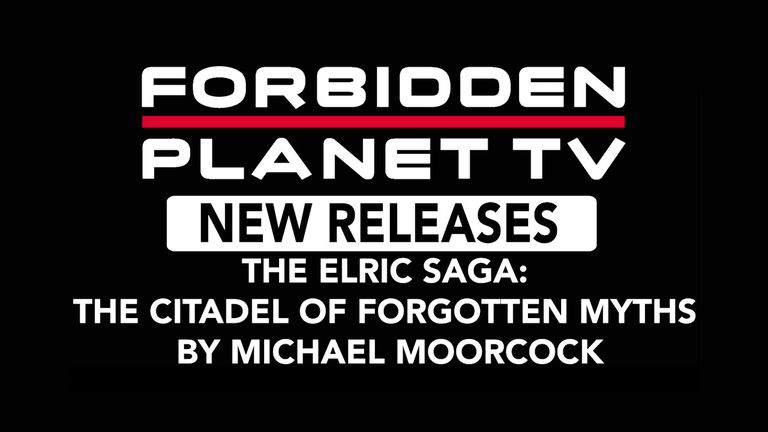 Legendary fantasy author Michael Moorcock returns to Forbidden Planet TV to chat with us about speaking up for chaos and the upcoming October publication of his long-awaited Elric novel, The Citadel of Forgotten Myths, Mike's first new Elric tale for 12 years (since the publication of his Black Petals novella in 2010). Moorcock and Sumner chat about the genesis and themes of Mike's new novel - and stop along the way to discuss Titan Comics' beautiful remastered archive edition of master artist P. Craig Russell's adaptation of Stormbringer, to compare notes about their experiences of working at IPC and chat about a variety of other subjects, including the value of discretion and the impossibility of finding a decent English Sunday roast dinner in Texas.

THE CITADEL OF FORGOTTEN MYTHS
Elric along with his companion Moonglum return, in this prequel set within the early days of Elric’s wanderings, in order to investigate the history of Melniboné and its dragons, known as the Phroon, in this exciting new addition to the Elric Saga from World Fantasy Lifetime Achievement Award winner Michael Moorcock.

Elric is the estranged emperor of the Melnibonéan empire, struggling with his nature while desperately striving to move forward with his dying empire alongside the constant thirst of his soul-sucking sword, Stormbringer.

Elric is on the hunt for the great Citadel of Forgotten Myths while traveling through the remnants of his empire with his tragic best friend Moonglum, as Elric seeks the answers to the nature of the phroon of The Young Kingdoms. Taking place between the first and second book in the Elric Saga, The Citadel of Forgotten Myths is perfect for longtime fans and those new to this epic fantasy series.

THE MICHAEL MOORCOCK LIBRARY ELRIC: STORMBRINGER BY P. CRAIG RUSSELL
Hailed as a modern masterpiece on its first release and considered to be Russell’s finest work. This volume collects the critically acclaimed, Eisner Award winning, 7-issue mini-series, adapted and drawn by the artist and writer, P. Craig Russell, who worked directly with Michael Moorcock on the script.

Stormbringer marks the climatic chapter of the epic Elric saga, bringing to a conclusion the story of Elric of Melniboné, wielder of the Runeblade Stormbringer, and his legendary quest for vengeance. The stage is set for one final battle between the forces of Chaos and Law, and one final, truly apocalyptic fight to the death between Elric and his mortal enemy Jagreen Lern for control of the Cosmic Balance.

You can order The Citadel of Forgotten Myths and the archive edition of P. Craig Russell's adaptation of Stormbringer below.

You can order Judge Dredd by Brian Bolland Apex Edition below.

Check out Mike's other appearances of Forbidden Planet TV HERE