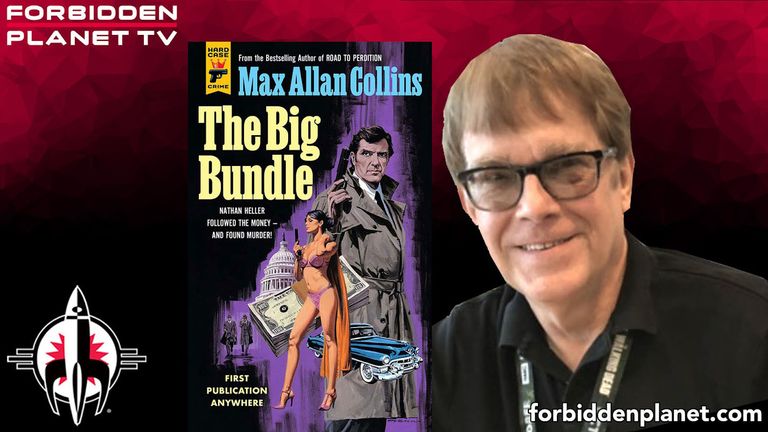 Hot off his Edgar Awards nomination for QUARRY'S BLOOD, MAX ALLAN COLLINS - returns to Forbidden Planet TV to chat with us about the arrival of his flagship historical crime series - the NATHAN HELLER mysteries - at the publishing home Heller was made for: HARD CASE CRIME! Max's first book out of the maximum security Hard Case vault is the critical smash THE BIG BUNDLE and Max takes us into the research-heavy woods of its creation, before catching up on his plans for Mickey Spillane's MIKE HAMMER series: two climactic novels (published by Titan Books) that definitively conclude the vengeance-fuelled private eye's guns-blazing life story!

Nathan Heller, star of MWA Grandmaster Max Allan Collins’ most acclaimed series of novels (more than 1 million copies sold to date!), comes to Hard Case Crime for the first time in an all-new thriller drawn from the pages of history.

A millionaire’s little boy is kidnapped and private eye Nathan Heller is called in to help.

But when half of the record $600,000 ransom goes missing, Heller must wade through a morass of deception and depravity to blow the lid off a notorious crime whose consequences reach into the corridors of power in Washington D.C., where a pair of young brothers named Kennedy work tirelessly to take down crooked union boss Jimmy Hoffa…

You can purchase The Big Bundle below.