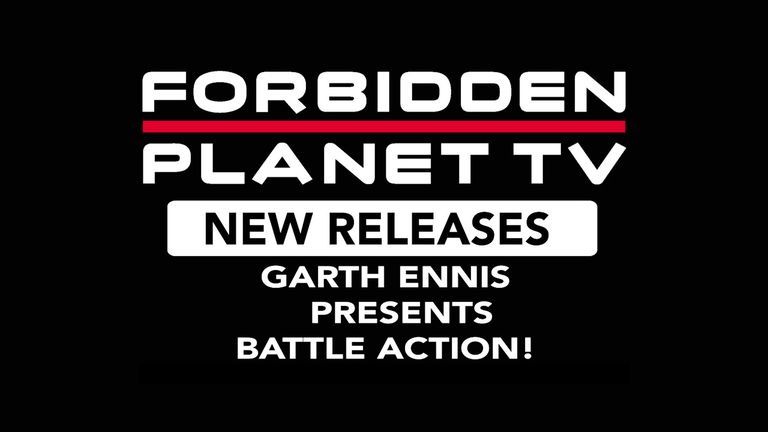 Channeling the spirit of General MacArthur, Garth Ennis returns once more to Forbidden Planet TV for another chat with Andrew Sumner, this time about the campaign of creation behind his latest WWII combat/gritty action comic - his personally-curated revival of IPC Magazines' classic Battle Action title . This glorious 96 page hardcover, published by those good, good people at Rebellion and featuring seven brand-new stories by Garth, starring classic IPC war/action characters and illustrated by an all-star team of artists, launches in June in the UK and July in North America.

Two of the greatest British comics of all time join forces - and bring you seven new stories of blazing Battle Action! Writer Garth Ennis (Preacher, The Boys) presents his own take on the classic characters of Battle and Action. Ace fighter pilot Johnny Red battles Skreamer of the Stukas on the nightmarish Russian front. Veteran leader The Sarge and his section face hell in the brutal Italian campaign. Wheeler-dealer Crazy Keller drives for his life as World War Two comes to its bloody conclusion. Lethal British agent Dredger doles out justice- of a kind- on the streets of 1980s London.

All these and more in this high-octane collection of fantastic new combat strips, featuring scripts by Ennis and art by some of the biggest names in modern comics, including Kevin O’Neill (Nemesis The Warlock, League of Extraordinary Gentlemen), Chris Burnham (Batman), John Higgins (Watchmen, Dreadnoughts) and P.J. Holden (The Lion & The Eagle). Get your front-row seats to the front line, as only the legendary Battle Action can deliver!

You can buy the Battle Action hardcover below.

You can buy The Boys right HERE