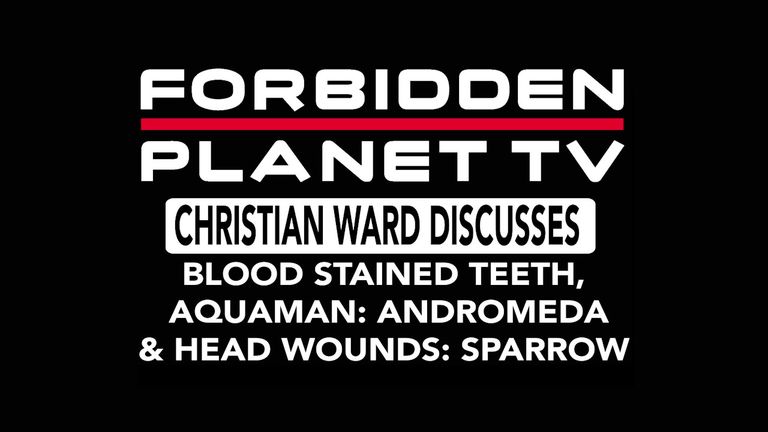 Christian Ward is one of the UK's busiest (and most successful) Eisner-award-winning writer/artists right now - his new Image series Blood Stained Teeth (created with Patric Reynolds) and his new DC Black Label series Aquaman: Andromeda (created with Ram V) are both selling out everywhere and excitement is going through the roof for his new Legendary Comics graphic novel Head Wounds: Sparrow (created with a range of great authors and developed by Oscar Isaac). Christian dropped into the Forbidden Planet TV booth at MCM London Comic Con to chat with Andrew Sumner about all of those projects!

HEAD WOUNDS: SPARROW - Leo Guidry is a bad person and an even worse cop. When he suffers a psychic head wound, his life on the edge slips into spiritual warfare.

In a landscape of angels, devils, and everything in between, can a person utterly devoid of empathy find a way to overcome the forces of darkness that have infiltrated his reality?

This is the world of Head Wounds: Sparrow. The new original supernatural noir graphic novel from creator Bob Johnson, with story by John Alvey, and developed by actor Oscar Isaac and Jason Spire is written by New York Times best-selling writer Brian Buccellato and features art by Christian Ward.

AQUAMAN: ANDROMEDA - Deep in the Pacific Ocean, at the farthest possible distance from any land, sits Point Nemo: the spaceship graveyard.

Since the dawn of the space race, the nations of the world have sent their crafts there on splashdown, to sink beneath the silent seas. But there is something… else at Point Nemo. A structure never made by human hands. And that structure seems to be… waking up.

The crew of the experimental submarine Andromeda, powered by a mysterious black-hole drive, have been chosen to investigate this mystery. But they aren’t the only ones pursuing it. Anything of value beneath the ocean is of value to the master pirate Black Manta… and anything that attracts Black Manta attracts Arthur Curry, his lifelong foe, the Aquaman!

But heaven help them all when the doors of the mystery at Point Nemo swing wide to admit them… Bringing a bracing cosmic-horror sensibility to the world of Aquaman, rising superstars Ram V (Venom, The Swamp Thing) and Christian Ward (Thor, Invisible Kingdom) team up to put Arthur Curry through an exercise in psychological terror that could break the will of even a king!

Atticus Sloane-misanthrope, criminal, asshole, and vampire-lives in a world where blood isn’t the only thing vamps crave. And for the right price, he’ll make you a vampire too. After all, immortality isn’t cheap.

You can order Head Wounds: Sparrow below.