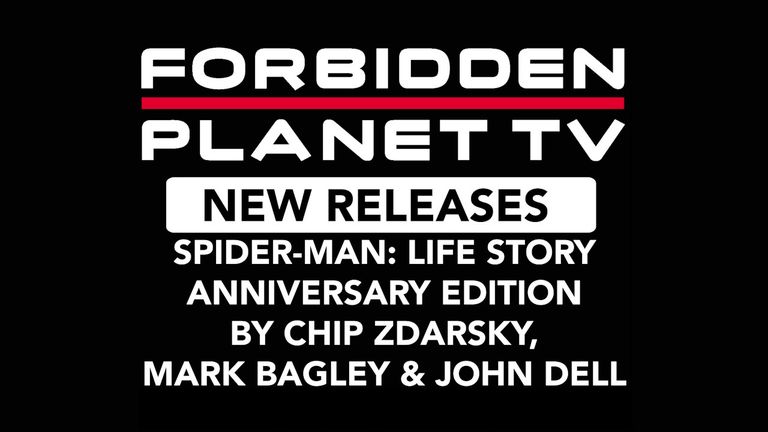 Chip Zdarsky dons his spider-costume and returns to Forbidden Planet TV to chat with Andrew Sumner about the creation of his critically-acclaimed and highly-successful Spider-Man series, Life Story, co-created with legendary/wildly-prolific Spidey artist Mark Bagley. Life Story adapts the entire history of Spider-Man from beginning to end, with Peter Parker ageing in real time against the key events of the decades through which he lived! July 2022's special Anniversary Edition is released to coincide with the 60th anniversary of Spidey's creation in Amazing Fantasy #15 and contains collects issues #1-#6 of Life Story alongside 2021's Life Story annual, a deep-dive into the life and career of Spidey adversary J. Jonah Jameson!

SPIDER-MAN: LIFE STORY - In 1962's Amazing Fantasy #15, fifteen-year-old Peter Parker was bitten by a radioactive spider and became the Amazing Spider-Man. 57 years have passed in the real world since that event - so what would have happened if the same amount of time passed for Peter as well? To celebrate Marvel's 80th anniversary, Chip Zdarsky and Spider-Man legend Mark Bagley unite to spin a unique Spidey tale - telling the entire history of Spider-Man from beginning to end, set against the key events of the decades through which Spidey lived. Prepare to watch Peter Parker age through 57 years of groundbreaking history - and find out what happens to him, and to those he loves the most! Collecting: Spider-Man: Life Story #1-6 & Spider-Man: Life Story Annual (2021) #1.

MARVEL'S SPIDER-MAN: SCRIPT TO PAGE - The Marvel Script To Page series is an official behind-the-scenes look at the craft of writing comic books, featuring exclusive scripts and commentary from top Marvel creators and editors.

It’s been 60 years since the spectacular Spider-Man first swung into action, and the web-slinging superhero is now a household name.

You can order Spider-Man Life Story Anniversary Edition and Titan Books' Marvel's Spider-Man Script-to-Page, which analyses three of the original scripts from Life Story below.

You can order more great books by Chip Zdarsky HERE

You can order more great books by Mark Bagley HERE