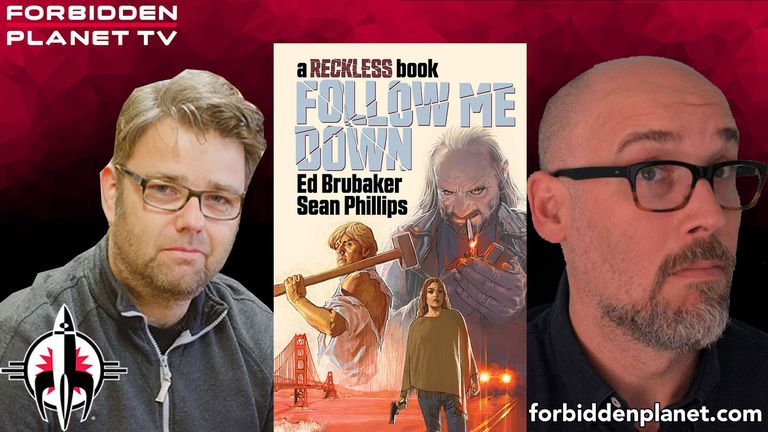 Multi-Eisner-Award-winning creative team, Ed Brubaker & Sean Phillips, return to Forbidden Planet TV to take us behind the scenes of their latest Ethan Reckless graphic novel, Follow Me Down.

Along the way, Ed & Sean also chat with us about Pulp: The Process Edition; the second Parker Martini Edition: Last Call (featuring an all-new Alan Grofield story from Sean & Ed); various 60s/70s California based detective shows (from The Streets of San Francisco to The Rockford Files to Harry O to Larry Cohen's Coronet Blue and Roy Huggins' The Outsider) and Clint Eastwood's third (and most atypical) directorial effort: 1973's Breezy.

In the wake of the 1989 earthquake, Ethan takes a trip to San Francisco to search for a missing woman. But almost immediately, he finds himself going down a path of darkness and murder in a case unlike anything he’s faced before.

Follow Me Down is the most intense of the Reckless books so far - and yet another hit from the most acclaimed team in comics, creators of Pulp, My Heroes Have Always Been Junkies, Criminal, The Fade Out, and Kill Or Be Killed. A must-have for all Brubaker & Phillips fans!

You can order Forbidden Planet's signed bookplate edition of Follow Me Down, Pulp: The Process Edition, and Richard Stark's Parker: The Martini Edition: Last Call (Hardcover) below.