John Walsh digs deep into Doctor Who's movie history with DOCTOR WHO & THE DALEKS!

Film-maker & master of movie-making journalism, John Walsh, returns to Forbidden Planet TV to take us behind the scenes of his latest super-detailed making-of-the-movie book: DR. WHO & THE DALEKS: THE OFFICIAL STORY OF THE FILMS.

For the first time ever, John was granted full detailed access to the production notes for Milton Subotsky's two 1960s Doctor Who movie productions starring Peter Cushing as an alternate non-Time Lord version of the Doctor ("Dr. Who & The Daleks" and "Daleks' Invasion Earth: 2150 AD") and he's unearthed a treasure trove of previously-unknown-and-often-speculated about information. 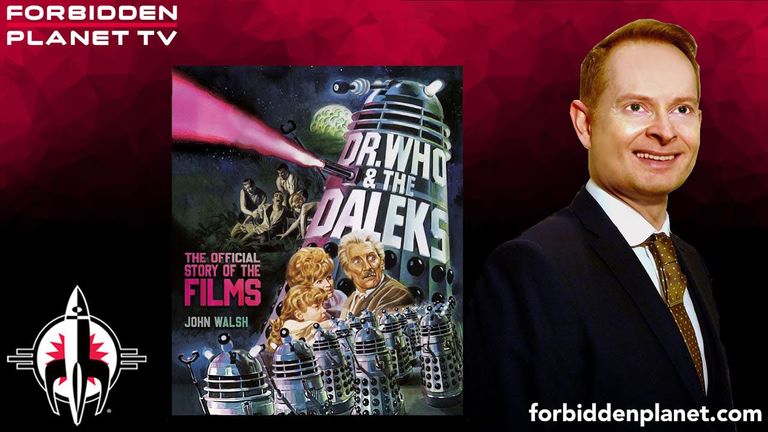 The definitive guide to the making of the classic 1960s Dr. Who movies, lavishly illustrated and packed with insights into these beloved films.

Dr. Who and the Daleks: The Official Story of the Films is the definitive guide to the making of Dr. Who and the Daleks and Daleks’ Invasion Earth 2150 A.D. The first and only big-screen adaptations of the long-running TV series, the films, starring Peter Cushing as the titular time-traveller, are beloved by fans – and the Daleks, in glorious Technicolor, have never looked better.

Author and film expert John Walsh has unearthed a treasure trove of archive material, interviews and stunning artwork, and takes us through the whole process of translating the metal monsters from small screen to big.

In-depth information on the production, design, casting and special effects is accompanied by full-colour illustrations, including props, posters, and behind-the-scenes photography, making it the perfect gift for fans of the films.

John will be signing copies of this awesome book at Forbidden Planet London on Saturday 10th December 2022 from 5pm to 6pm and you. can find more details HERE

You can order signed and non-signed editions of the book below.