We are happy to announce that Simon Spurrier & Charlie Adlard will be signing copies of Damn Them All #1 at Forbidden Planet London on Saturday 29th October. 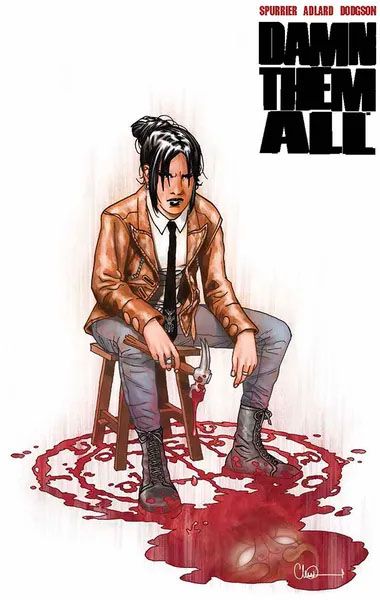 Meet Ellie “Bloody El” Hawthorne: occultist-for-hire. Following the death of Ellie’s uncle, an infamous magician and occult detective, the 72 devils of the Ars Goetia are mysteriously freed from their infernal realm. Now it’s up to Ellie to track down each of these exiled demons and damn them right back to Hell by any means necessary… holy water, conjuration, or just her trusty, rusty claw hammer.

Simon “Si” Spurrier is an Eisner Award-nominated writer of novels, television shows, and comics. He is known for his work on comic book series such as X-Men and Star Wars for Marvel Entertainment and Hellblazer and Suicide Squad for DC Comics. His creator-owned projects include BOOM! Studios hits such as Alienated, Coda, The Spire, and Six-Gun Gorilla.

Charlie Adlard is a British comic book artist and illustrator best known for his work on the global phenomenon, The Walking Dead. Charlie has been a “veteran” of the comic industry for over 25 years. He’s spent the majority of his time since 2003 working on The Walking Dead, which finished in 2019, and he has received many industry awards for his work on the series culminating in winning the Sergio Aragonés International Award for Excellence in Comic Art in 2019. In his time as a cartoonist he has worked on many other projects as far reaching as Mars Attacks, The X-Files, Judge Dredd, Savage, Batman, X-Men, and Superman, as well as creator-owned projects closer to his heart like Astronauts in Trouble, Breath of the Wendigo, Codeflesh, Rock Bottom, Vampire State Building, and White Death.