We are thrilled to announce that the amazing Manga creator Eldo Yoshimizu will be signing various copies of his books at Forbidden Planet London on Saturday 11th June 2022 from 1:00pm - 3:00pm 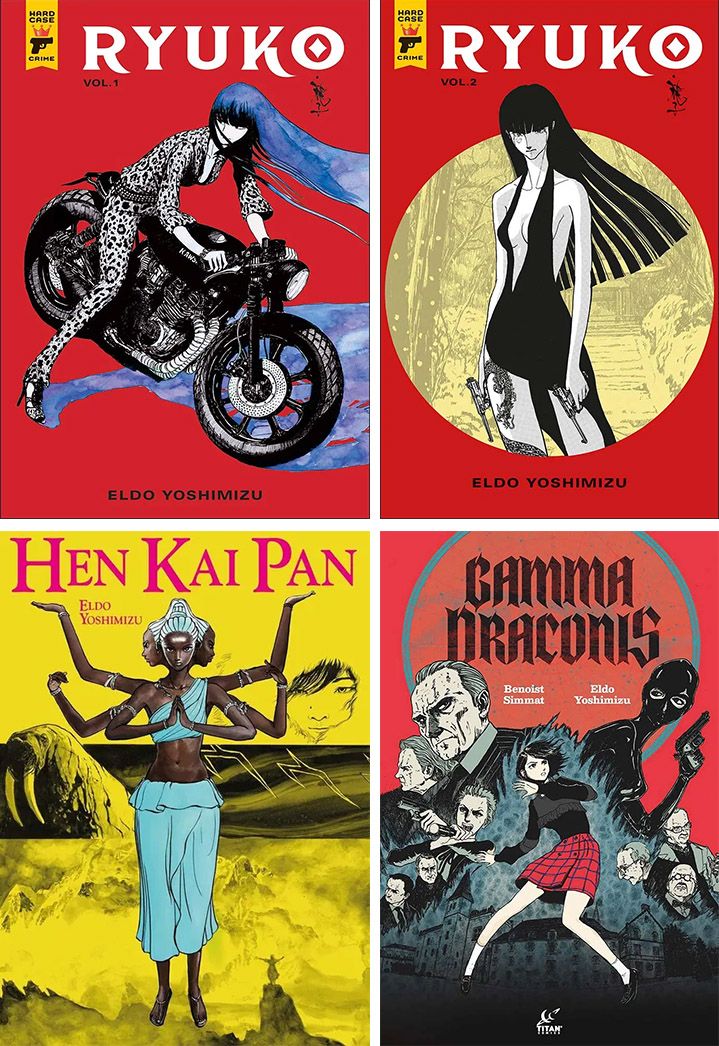 Hen Kai Pan - Dismayed by the havoc wreaked on the Earth by humankind, its five guardian spirits decide to act. But as they argue amongst themselves on what the judgement should be, one enraged spirit, Nila, becomes determined to take matters into her own hands, forcing the remaining four to unite in a desperate final battle to prevent her from wiping not just humans, but all life from the face of the planet.

This is a highly personal and timely book that features some of Eldo’s most beautiful artwork to date.

With its central themes of ecology, philosophy and spirituality, Hen Kai Pan is a kinetic, emotionally charged work that delivers a powerful message that will resonate not just with manga fans, but all readers.

Ryuko: Volume 1 - From creator Eldo Yoshimizu comes a stunning manga which tells the tale of Ryuko, a fierce woman of the Yakuza thirsty for revenge.

Ryuko is a hard-hitting, motorcycle-riding, high ranking member of the Japanese mafia stationed in the Middle-East. After a fierce battle with the government, she becomes embroiled with the Chinese and an unknown terrorist organisation.

Everyone has their own agenda, but it becomes personal for Ryuko when her mother is kidnapped and she was forced to kill her father. What is the right thing to do in this morally complicated situation?

Ryuko has a choice to make, but it’s tough when good and evil appear to be two sides of the same coin…

Ryuko: Volume 2 - The final book which explores the shocking life of Ryuko, a tough woman of the Yakuza.

Volume One saw Ryuko’s past being explored, the shocking involvement of her family, and revelations about her mother.

Now Ryuko sets about putting things right, searching for lost members of her family, and attempting to save allies who are in dire situations. But the involvement of a Chinese criminal organisation make things difficult - almost impossible - for Ryuko…

Gamma Draconis - Eldo Yoshimizu, the creator of the epic Yakuza Manga, Ryuko, teams up with Benoist Simmat to create another dazzling crime tale.

Aiko Moriyama studied religious art at the Sorbonne, but her research in occultism quickly led her down a dangerous path. When several experts around her come under attack from a mysterious entity rising from the depths of the web, she finds herself embroiled in a police investigation involving the sinister leader of an international organization.

From London to Tokyo, between transhumanism and black magic, Aiko is determined to solve the enigma of Gamma Draconis and to discover how exactly her family is involved…

Eldo Yoshimizu was born in 1965 in Tokyo. Having specialised in sculpture while studying at the University of Arts in Tokyo, he has installed numerous works in public space - some of them are among the most significant sculptures in Japan. Exhibitions in Japan as well as throughout Asia and in New York prove his international success and led him in 1994 to a scholarship as "Artist in Residence" in New York. In 2003 he realised the work »First Light« for the art and exhibition space of the Louis Vuitton branch in Omotesando. With the feeling of having satisfied his hunger in the field of contemporary fine art, he turned to Gekigaand began to focus on the interplay of object and space in the art of storytelling. He also works as a photographer and as a musician.