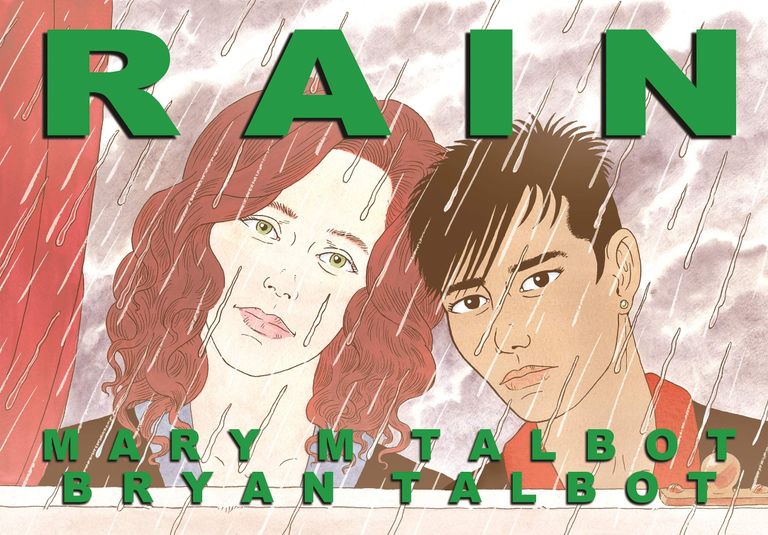 Set against the backdrop of disastrous flooding in the North of England, Rain dramatically chronicles the developing relationship between two young women, one of whom is a committed environmental campaigner. Their wild Brontë moorland is being criminally mismanaged. Birds and animals are being slaughtered. Across the country, crops are being systematically poisoned, even the soil itself. Rain centres on one relatively small example of moorland ownership by an elite group that impacts catastrophically on the unlanded majority living in the valley below. But the campaigners know that ‘a million other valleys need saving’. They need saving not just for the sake of their human inhabitants, but for the insects and plants, birds and mammals and all the other inhabitants large and small that we share this planet with – our non-human fellow earthlings.

Rain is the first contemporary graphic novel from Bryan and Mary Talbot, dealing with the here and now of environmental degradation that threatens us all. The story follows the everyday experiences of ordinary people, while engaging with pollution, climate change, moorland mismanagement and the disruption, misery and loss that these things bring. The characters are fictitious; what's happening around them is shockingly real.

AND DON’T MISS OUR DISPLAY OF BRYAN’S ORIGINAL ART – ON DISPLAY SOON AT OUR NEWCASTLE GALLERY!

Mary Talbot is an internationally acclaimed scholar who has published widely on language, gender and power, particularly in relation to media and consumer culture. She is the co-author of the graphic novels Dotter of her Father's Eyes and Sally Heathcote: Suffragette.