Join us at our London Megastore on Saturday 20th July from 3pm, as we host a meet'n'greet with some of the most exciting names in SFF! There will be books, chat, swag and nibble merriment. 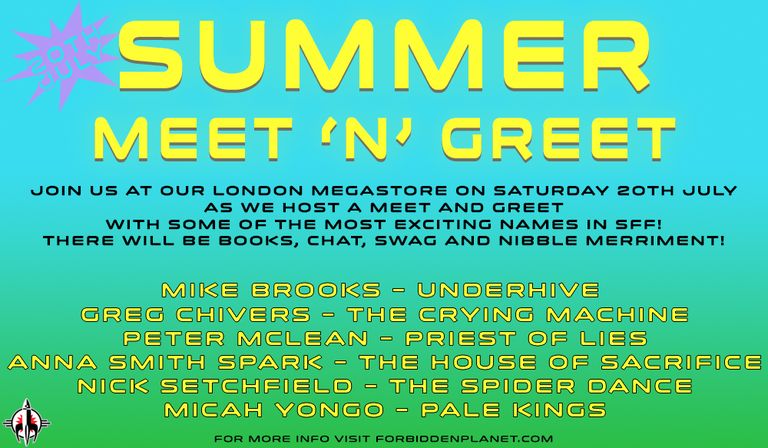 Mike Brooks has worked for a homelessness charity since 2004 and when not either working or writing he goes walking in the Peak District, sings and plays guitar in a punk band, and DJs wherever anyone will tolerate him. Underhive is a WarHammer 40k anthology.

Greg Chivers has twenty years of experience as a television producer, working on shows such as the Science Channel’s What on Earth? and NASA's Unexplained Files, which made global headlines in 2017. He is a graduate of the Curtis Brown creative writing course and the Faber Academy. The Crying Machine is his first novel.

Peter McLean grew up in the Norwich alternative scene, alternating dingy nightclubs with martial arts practice, and working in corporate IT. Priest of Lies is his follow-up to the hugely successful Priest of Bones.

Anna Smith Spark has BA in Classics, an MA in history and a PhD in English Literature. She loves Grimdark, epic fantasy and historical military fiction. The House of Sacrifice is the conclusion to the Empires of Dust trilogy, begun in The Court of Broken Knives.

Nick Setchfield is a writer, editor and entertainment journalist who’s work has appeared in SFX and Total Film. He’s also been a film reviewer for the BBC and a scriptwriter for ITV’s Spitting Image. The Spider Dance is his follow up to his debut novel, The War in the Dark.