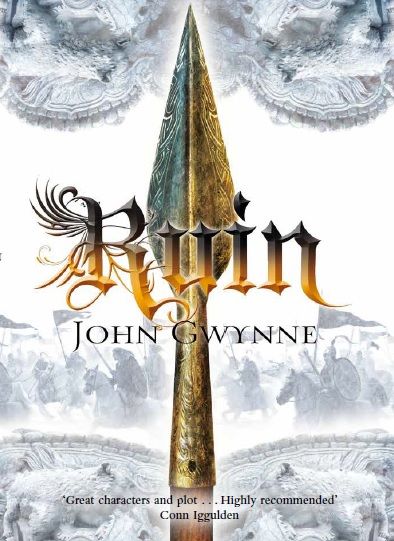 JOHN GWYNNE will be signing The Faithful and The Fallen Book 3: RUIN at the Forbidden Planet London Megastore on Thursday 16th July from 6 – 7pm!

The Banished Lands are engulfed in war and chaos. The cunning Queen Rhin has conquered the west and High King Nathair has the cauldron, most powerful of the seven treasures.

At his back stands the scheming Calidus and a warband of the Kadoshim, dread demons of the Otherworld. They plan to bring Asroth and his host of the Fallen into the world of flesh, but to do so they need the seven treasures. Nathair has been deceived but now he knows the truth. He has choices to make; choices that will determine the fate of the Banished Lands.

Elsewhere the flame of resistance is growing - Queen Edana finds allies in the swamps of Ardan. Maquin is loose in Tenebral, hunted by Lykos and his corsairs. Here he will witness the birth of a rebellion in Nathair’s own realm.

Corban has been swept along by the tide of war. He has suffered, lost loved ones, sought only safety from the darkness. But he will run no more. He has seen the face of evil and he has set his will to fight it. The question is, how? With a disparate band gathered about him - his family, friends, giants, fanatical warriors, an angel and a talking crow - he begins the journey to Drassil, the fabled fortress hidden deep in the heart of Forn Forest. For in Drassil lies the spear of Skald, one of the seven treasures, and here it is prophesied that the Bright Star will stand against the Black Sun.

John Gwynne lives with his wife and children in East Sussex. He’s had many strange and wonderful jobs, including packing soap in a soap factory, waitering in a French restaurant in Canada, playing double bass in a rock n roll band, and lecturing at Brighton University. These days, he restores vintage furniture and indulges his geekier passions by writing novels.