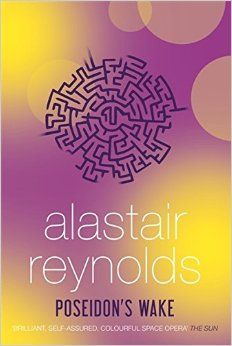 Alastair Reynolds will be signing Poseidon’s Adventure at the Forbidden Planet London Megastore on Thursday 30th April from 6 – 7pm!

From ARTHUR C. CLARKE nominated author ALASTAIR REYNOLDS comes a new stand-alone adventure about the untold potential of the universe.

An adventure grand in both scale and concept, POSEIDON’S WAKE follows two fascinating characters as they embark on a quest to solve one of the greatest mysteries of the universe: faster-than-light travel. Delving deep into the unknown and far beyond our knowledge, the characters face ever-increasing challenges, but the biggest danger might come from closer to home. With humanity split on how to move forward, there are some who would do whatever it took to stop mankind’s progress beyond the stars.

Completing the informal trilogy that began with BLUE REMEMBERED EARTH and ON THE STEEL BREEZE, POSEIDON’S WAKE is as ambitious and powerful as any of Alastair’s work, a masterpiece from one of the biggest names in British science fiction at his absolute best.

ALASTAIR REYNOLDS was born in Barry, South Wales. He studied at Newcastle and St. Andrews Universities, earning a Ph.D., before moving to Holland and working for the European Space Agency. REVELATION SPACE, Alastair’s debut novel, is a perpetual best-seller, with more than 100,000 copies sold to date.