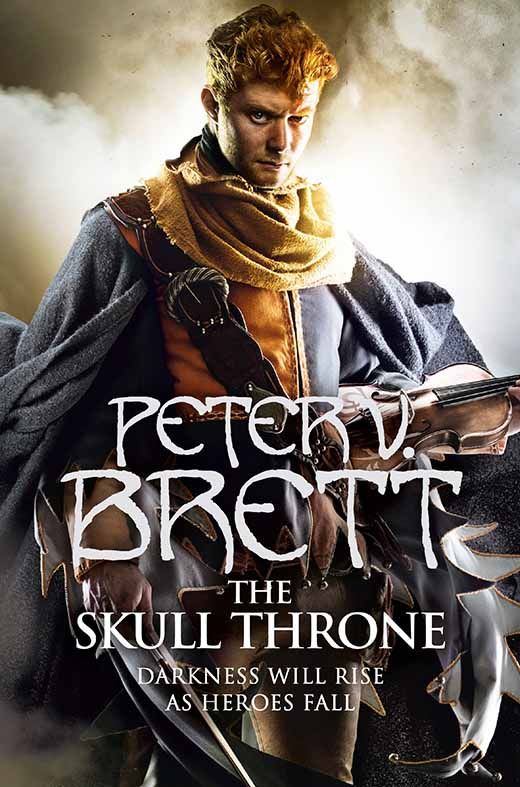 PETER V BRETT will be signing THE SKULL THRONE (HarperCollins) at the Forbidden Planet London Megastore on Thursday 9th April from 5:30 – 7:30pm!

Built from the skulls of fallen generals and demon princes, it is a seat of honor and ancient, powerful magic, keeping the demon corelings at bay. From atop the throne, Ahmann Jardir was meant to conquer the known world, forging its isolated peoples into a unified army to rise up and end the demon war once and for all.

But Arlen Bales, the Warded Man, stood against this course, challenging Jardir to a duel he could not in honor refuse. Rather than risk defeat, Arlen cast them both from a precipice, leaving the world without a savior, and opening a struggle for succession that threatens to tear the Free Cities of Thesa apart.

In the south, Inevera, Jardir’s first wife, must find a way to keep their sons from killing each other and plunging their people into civil war as they strive for glory enough to make a claim on the throne.

In the north, Leesha Paper and Rojer Inn struggle to forge an alliance between the duchies of Angiers and Miln against the Krasians before it is too late.

Caught in the crossfire is the duchy of Lakton - rich and unprotected, ripe for conquest.

Peter went to the University at Buffalo, where he studied Dungeons & Dragons, fencing, and girls, and gained a Bachelor of Arts degree in English. Following college, Peter managed a comic shop and explored medical publishing.