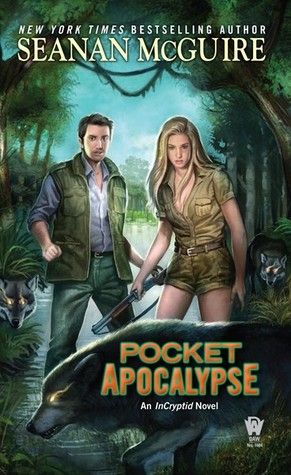 Seanan McGuire will be signing Pocket Apocalypse at the Forbidden Planet London Megastore on Wednesday 7th April from 6 – 7pm!

Alexander Price has survived gorgons, basilisks, and his own family - no small feat, considering that his family includes two telepaths, a reanimated corpse, and a colony of talking, pantheistic mice.

Still, he's starting to feel like he's got the hang of things... at least until his girlfriend, Shelby Tanner, shows up asking pointed questions about werewolves and the state of his passport. From there, it's just a hop, skip, and a jump to Australia, a continent filled with new challenges, new dangers, and yes, rival cryptozoologists who don't like their "visiting expert" very much.

Seanan McGuire is the author of the October Daye urban fantasies, the InCryptid urban fantasies and several other works both stand-alone and in trilogies or duologies. She also writes under the pseudonym Mira Grant. She was the winner of the 2010 John W. Campbell Award for Best New Writer, and her novel Feed was named as one of Publishers Weekly's Best Books of 2010. In 2013 she became the first person ever to appear five times on the same Hugo Ballot.