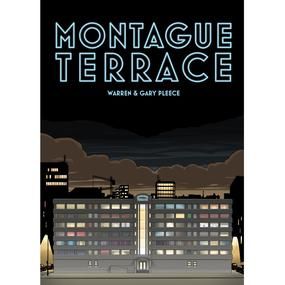 In Montague Terrace, nothing is quite what is seems. Within its boundaries live an array of strange and extraordinary residents, including Paul Gregory, self-exiled pop crooner holed up in his Montague hovel for close to forty years, with only fading memories of a semi-successful music career and a bottle of JD for company. Mrs Beatrice Green, codename Babushka, an aged former special ops agent fighting a new war against overzealous council officials. Marvo the Magic Bunny and Mystical Marvin, a pair of down-on-their luck entertainers, shielding a disturbing past. The Puppeteer, toiling away day and night, pulling the strings of world events and causing chaos out of order.

Warren Pleece and Gary Pleece, legends of the British comics scene, have been working in comics for almost twenty-five years, since the foundation of their indie comics magazine, Velocity, in the late eighties. Warren has worked as an artist for DC Comics, alongside Grant Morrison and Neil Gaiman among others.