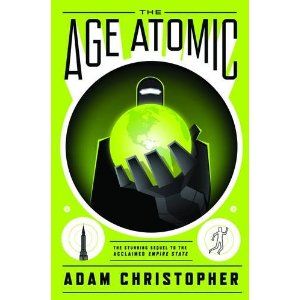 ADAM CHRISTOPHER will be reading from and signing an EXCLUSIVE LIMITED EDITION of his new novel THE AGE ATOMIC (Angry Robot) at the Forbidden Planet London Megastore on Thursday 4th April from 6 – 7pm.

The sequel to Empire State – the superhero-noir fantasy thriller set in the other New York.

The Empire State is dying. The Fissure connecting the pocket universe to New York has vanished, plunging the city into a deep freeze and the populace are demanding a return to Prohibition and rationing as energy supplies dwindle.

Meanwhile, in 1954 New York, the political dynamic has changed and Nimrod finds his department subsumed by a new group, Atoms For Peace, led by the mysterious Evelyn McHale. As Rad uncovers a new threat to his city, Atoms For Peace prepare their army for a transdimensional invasion. Their goal: total conquest – or destruction – of the Empire State

“If you’re not careful, Adam Christopher will melt your face off with The Age Atomic: The heat of the prose pairs with searing action. This is fireball storytelling and a rare follow-up that’s better than its predecessor.” Chuck Wendig, author of Blackbirds

The Forbidden Planet exclusive limited edition hardcovers of SEVEN WONDERS and EMPIRE STATE will also be available, as will the paperback editions of all three titles.