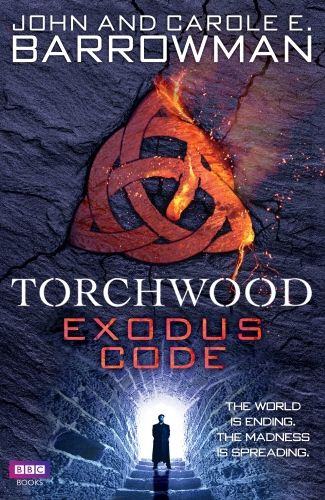 Forbidden Planet are delighted to announce a signing by John and Carole E Barrowman for TORCHWOOD: EXODUS CODE (BBC Books) at our London Megastore on Thursday September 20th, from 6 – 7pm.

It starts with a series of unexplained events. Earth tremors across the globe. Women being driven insane by their heightened and scrambled senses. And the world is starting to notice – the Twitter trend is #realfemmefatales. Governments and scientists are bewildered and silent. The world needs Torchwood, but there’s not much of Torchwood left.

Captain Jack has tracked the problem to its source: a village in Peru, where he’s uncovered evidence of alien involvement. In Cardiff, Gwen Cooper has discovered something alien and somehow connected to Jack. If the world is to be restored, she has to warn him – but she’s quickly becoming a victim of the madness too…

John became Captain Jack Harkness in Doctor Who in May 2005 and appeared in eleven episodes of the hit show, before taking the lead role in Torchwood. He’s had starring roles on stage and television, including his popular BBC entertainment show Tonight’s The Night.

Carole is Professor of English and Director of Creative Studies in Writing at Alverno College in Milwaukee. She writes a monthly crime fiction column and regular reviews and features for newspapers. She contributed a chapter to the Hugo award-winning non-fiction anthology Chicks Dig Time Lords.

PLEASE NOTE: Due to huge demand, we are not currently able to take pre-orders for this title.

At the event itself, John and Carole will ONLY be signing copies of Exodus Code. Thank you