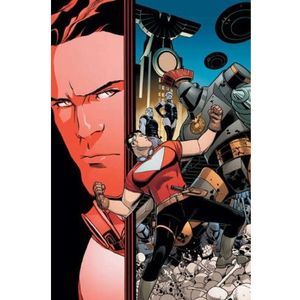 As Tom Strong and his family prepare to celebrate a wedding, the unthinkable happens: before their eyes, reality alters to become a world conquered by Nazis and ruled by Tom’s nefarious son, Albrecht. To restore the world he knew, Tom must journey back in time and seek help from the only man he can trust: himself. But will even two Tom Strongs be enough to stop the Robots of Doom?

Chris Sprouse first met Alan Moore when he drew several issues of Moore’s script for Supreme. A year later, he and Moore created Tom Strong for America's Best Comics, for which Chris won two Eisner Awards in 2000, for Best Single Issue and Best Serialized Story. Taking over the scripting of Tom Strong, Peter K. Hogan started out as editor of cult political British comics Crisis and Revolver in the late 1980s and early 1990s, before working for 2000 AD and American comic book publishers Vertigo and America's Best Comics.