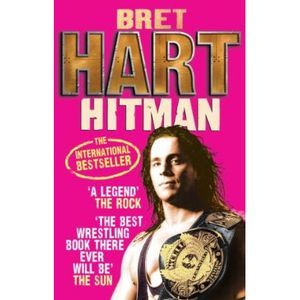 Bret ‘Hitman’ Hart will be signing 'Hitman: My Life In The Cartoon World of Wrestling' at the Forbidden Planet Megastore, 179 Shaftesbury Avenue, London, WC2H 8JR, on Friday 19th November 5:30 – 6:30pm

In Hitman, one of pro wrestling's biggest stars tells it like it was, with a human and very touching amount of detail. He relates the story of how a family-friendly, locally oriented sport run by curmudgeonly promoters was steamrollered by Hulk Hogan - fueled WWF marketing machine. Hart also vividly depicts the threadbare but thrilling family business he grew up in, road trips in crowded vans, meager pay, clownish ring antics and solid sense of brotherhood. This is a glance under the ropes of pro-wrestling, from one of its biggest stars.

Bret Hart is recognised as one of the best wrestlers in the world. Multiple record-holder and winner of manifold titles, he is known for never having injured another wrestler. He has a worldwide fan base and his own column in the Calgary Sun; he was also up for the lead in Batman Triumphant, before production was cancelled.