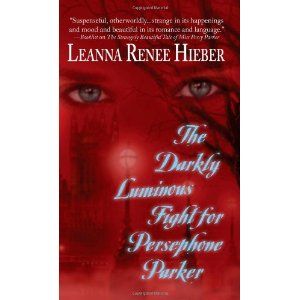 Award-winning author, actress and playwright Leanna grew up in rural Ohio where her childhood memories are full of inventing elaborate ghost stories. A scholarship to London and a focus in the Victorian Era set the stage for her Strangely Beautiful series. Her novella Dark Nest won the 2009 Prism Award for excellence in Futuristic, Fantasy and Paranormal Romance. A member of Actors Equity Association (AEA), the American Federation of Television and Radio Artists (AFTRA) and the Screen Actors Guild (SAG), Leanna works often in television. When not writing or on set, she loves a good Goth club and adventuring about her adopted hometown of New York City.

In The Darkly Luminous Fight, we meet again Percy Parker from the first book in the series. True love has found her, in the tempestuous form of Professor Alexi Rychman, but her mythic destiny is not complete. A war is coming, a desperate ploy of a spectral host. Victorian London will be overrun. Yet, Percy keeps faith. She stands within the mighty bastion of Athens Academy, alongside The Guard whose magic shields mortals from the agents of the Underworld. Wreathed in hallowed fire, they will stand together, no matter what might come.