Christopher Fowler signing Bryant & May Off The Rails 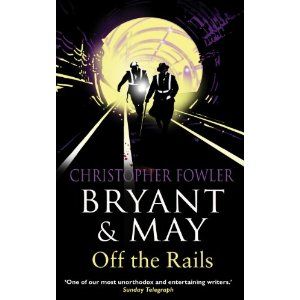 CHRISTOPHER FOWLER will be signing BRYANT AND MAY OFF THE RAILS at the Forbidden Planet Megastore, 179 Shaftesbury Avenue, London WC2H 8JR on Thursday 24th June 6 – 7pm.

Arthur Bryant, John May and the Peculiar Crimes Unit are on the trail of an enigma: a young man called Mr Fox. But his identity is false, his links to society are invisible and his home yields no clues. All they know is that somehow he escaped from a locked room and murdered one of their best and brightest. Now the detectives are being lured down into the darkest recesses of the London Underground where their quarry, expertly disguised, has struck again. Their search takes them into the vast labyrinth of tunnels, a subterranean world full of legends and ghost stations, which tie the city together. Edging closer to what lies hidden beneath the city – and to the madness that is driving a man to murder – Bryant and May are about to uncover a mystery as bizarre as anything they have ever encountered . . .

Christopher Fowler is the multi award-winning author of thirty novels and ten short story collections such as Roofworld, Spanky and Soho Black plus seven previous Bryant & May novels, including the award- winning Full Dark House and The Victoria Vanishes. He has also written comedy and drama for BBC radio, including Radio One’s first-ever broadcast drama. He has a column in the Independent on Sunday, and has written for The Times, FT, Telegraph, Guardian, Daily Mail, Time Out, Black Static, Big Issue and many others.