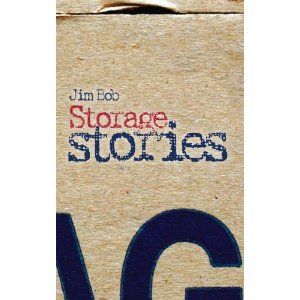 As lead singer of Carter: The Unstoppable Sex Machine, Jim Bob has had 14 top 40 singles, 4 top ten albums (including a number one) and played over 800 gigs all over the world. Since Carter USM split in 1997, he’s been involved with numerous creative musical projects including tours, solo and concept albums, plus a live solo acoustic DVD. His autobiography Goodnight Jim Bob was published in 2004; Storage Stories is his first novel.

Where do old pop stars go to die? They go to work in self-storage, where they make new friends who look like Juliette Binoche or who perform horrific surgery on themselves. They meet assorted bubblewrap fetishists, wooden statues that come to life at night a homicidal computer named HAL. Storage Stories reads like the autobiography of a man discovering what it's like to be famous and yet no longer successful – a man finds true love in the dusty world of a failing self-storage company.

Free copy of Jim Bob's CD 'Goffam' with every book bought! In store sales only. While stocks last.