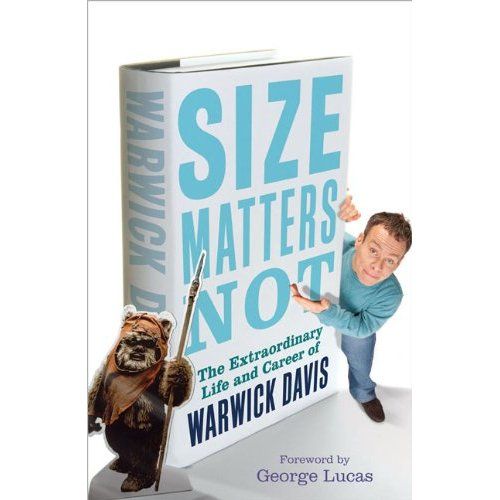 You may not recognise Warwick Davis’ name but you’ve seen him at work – he’s helped put more bums on cinema seats than Will Smith. Who else has helped destroy a Death Star? Defeated an evil sorceress? Taught magic to Harry Potter? Become a Jedi Master? Hitchhiked across the galaxy in search of the answer to the Ultimate Question? Or embarked on psychotic killing sprees as a gold-obsessed leprechaun? You’ll know Warwick Davis because, at three-foot-six, he’s ever so slightly below average height.

George Lucas, Carrie Fisher, Val Kilmer, Ron Howard and Ricky Gervais (amongst others) have all chipped in to this astounding book Size Matters Not. Warwick A. Davis made his screen debut as Wicket the Ewok in Return of the Jedi. His extremely rare condition has led to a career as the world's leading little actor. He also runs Willow Management, an agency representing actors below five feet and above seven, and lives in Peterborough with his wife, Sam and their two children, Annabel and Harrison. This is an extraordinary story.