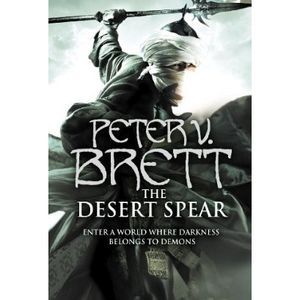 PETER BRETT will be signing the second book of the Demon Trilogy, The Desert Spear, at the Forbidden Planet Megastore, 179 Shaftesbury Avenue, London WC2H 8JR on Friday 16th April 6 – 7pm.

The Desert Spear pulls the reader into a world of demons, darkness and heroes. The Deliverer has returned, but who is he? Arlen Bales, formerly of the small hamlet of Tibbet's Brook, learnt harsh lessons about life as he grew up in a world where hungry demons stalk the night and humanity is trapped by its own fear. He chose a different path; chose to fight inherited apathy and the corelings, and he became the Painted Man. But the figure emerging from the desert is not Arlen. He is a friend and betrayer, and though he carries the spear from the Deliverer's tomb, he heads a vast army intent on a holy war against the demon plague.

Peter went to the University at Buffalo, where he studied gaming, fencing, and girls. Following college, Peter spent approximately eight months managing a comic shop and pondering what to do with his life. He then went into medical publishing and squandered ten years of his physical prime sitting in a cubicle. He contented himself with writing books he never hoped to sell. In 2007, his hard work and perseverance paid off – as he sold The Painted Man and left his day job to pursue writing full time. He lives in Brooklyn NY with his wife Dani and two cats, Jinx and Max Powers.