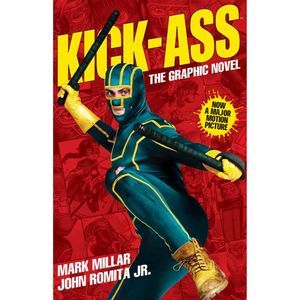 UPDATE: The first seventy five customers at this event will receive two tickets to the star studded premiere of 'Kick Ass'.

The KICK-ASS phenomenon unites acclaimed writer Mark Millar and award-winning artist John Romita Jr. for one of the 21st century’s most outrageous and acclaimed series. What would happen if you tried to be a superhero – if an ordinary kid in spandex came face-to-face with the criminal underworld?

In the graphic novel, Dave Lizewski is just a regular American teenager with a MySpace page, a comic book collection, and no girlfriend. As self-styled vigilante Kick-Ass, however, he’s about to find out exactly how a superhero would fare in the real world... and it’s going to get really, really violent!

To accompany the film release, Mark Millar has also written the full and official page-to-screen story of KICK-ASS, collecting the input of the cast and crew as well as artist John Romita Jr. With eye-popping art from the original comics, script extracts and hundreds of movie photos, this is the indispensable guide to every aspect of ass-kicking.

PLEASE NOTE: WE CANNOT OFFER THESE ITEMS AS SIGNED PRE-ORDERS. IF YOU WOULD LIKE A SIGNED COPY, YOU WILL NEED TO BE AT THE EVENT.

For our full range of KICK-ASS merchandise, please click here