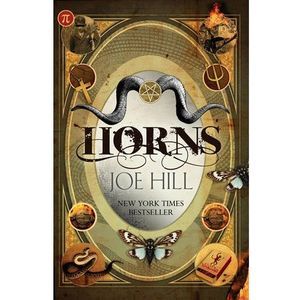 Ignatius Perrish spent the night drunk and doing terrible things. He woke up the next morning with a raging headache… and a pair of horns growing from his temples. Ig had been born into privilege, the second son of a renowned American musician, and the younger brother of a rising late-night TV star. He’d had it all – and he’d had the love of Merrin Williams, a love founded on shared daydreams, mutual daring, and unlikely midsummer magic. Then Merrin was gone, raped and murdered, with Ig the only suspect. Now Ig is possessed with a terrible new power to go with his terrible new look – and he will find the man who killed Merrin and destroyed his life. Being good and praying for the best got him nowhere. It's time for a little revenge; it's time the devil had his due.

A remarkable new author, Hill has both the distinction and pressure that comes from being the son of ‘Horror Supremo’ Stephen King – but signed with his publisher before they knew the family connection. He’s written one hugely successful novel, Heart-Shaped Box, and is the recipient of several international awards for his stories and novellas.

This will be Joe's ONLY London event!